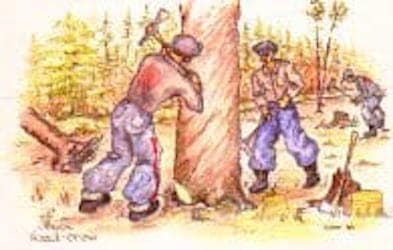 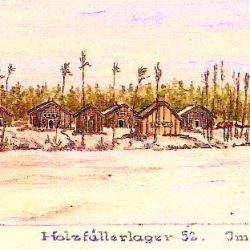 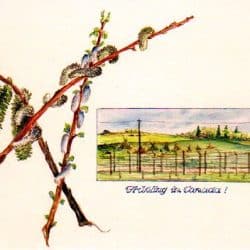 Hans Krakhofer, artist, mapmaker and illustrator, is one of Thunder Bay’s unique artists. The works seen here represent only a small proportion of his large volume of work which also includes wood and soapstone carvings, and sculpture as well as oil paintings. A great deal of his work deals with logging, appropriate for a man who worked most of his life for various forest industry giants in Northwestern Ontario, especially the Great Lakes Paper Company where he was employed from 1957 to his retirement in 1984. His introduction to the industry, however, was unique as these paintings illustrate. He started as a German prisoner of war working for the Minnesota-Ontario Paper Company.

Hans Krakhofer was born in Austria in 1918 and had joined the German Navy in 1938. In 1941 he was serving aboard a converted merchant ship which came into conflict with the British heavy cruiser Cornwall. It was an uneven battle and Hans’ ship went down quickly. He was one of only a handful to survive. “The shot hit the ammunition storage area and we sunk in three minutes,” he recalled in a 1984 interview. He was forced to tread water for three hours before being rescued by the Cornwall. “We were lucky there were no sharks around,” he said. Unfortunately, his entire cache of artworks went down with the ship.

After spending nine months in a POW camp in England, Krakhofer was transferred to a camp in Monteith, Ontario, near the city of Timmins. Canada was considered a safer place than England for prisoners as it was more distant from the scene of conflict, and the rough terrain of Northern Ontario was ideal for internment; there was little but bush to escape to.

In the Canadian camps conditions were generally good. Over the next 18 months at Monteith, Mr. Krakhofer took several university courses in navigation and mathematics, and continued to develop his artistic skills. Several of the works shown at left were done during his stay at Monteith.

In 1943, he volunteered to cut timber in a distant camp at Red Cliff Bay on the Lake of the Woods. “There was only one guard at the camp, and he was there more for our protection than to keep us from escaping,” he said, “where could we go?” The one hundred or so prisoners at the camp worked like regular loggers, and were paid 50 cents a day or 50 cents per cord cut and stacked. It was hard work and those who could not take it were returned to the POW camp.

During his time at Red Cliff Bay, Krakhofer continued to sketch and paint. So attractive was his work that a thief once stole all of his drawings which he kept in a handmade suitcase. “It made me so mad, I threw away my suitcase and everything,” Krakhofer recalled. But, fortunately for us, he started over again and produced a new set of drawings some of which are reproduced here.

These works of art provide us with a remarkable record of the logging industry over half a century ago – the hand labour with ax and saw, the ever present horses, and even the onset of technology represented by the early caterpillar used by the road crew. Note the unique denim jackets all POWs were compelled to wear. The red circle on the back readily identified them as prisoners, and they used to joke about the “bullseyes” painted on their backs.

Hans returned to Austria in 1946 but, finding the economy in tatters, he applied to return to Canada seeking employment in the woodlands. Like many German POWs, the treatment he received in Northwestern Ontario made him want to return. He came back to the region in 1953 and began work for the Abitibi Power and Paper Company in Auden as a cutter and skidder. His drafting talents were recognized, however, and he was soon posted to one of the large mills in Thunder Bay as a draughtsman. Joining Great Lakes Paper in 1957, he worked as a draughtsman, illustrator and map maker.

In 1960, he produced a portrait for a retiring company vice-president. So taken were his fellow workers with his talent that they too were demanding portraits. He must have painted hundreds of portraits over the next 25 years. Hans sold very little of his work; most of it was given away as gifts.

For Hans, his art was more than a hobby, it was his vocation. “My art is a reflection of my whole being,” he said in 1975 as he reflected on his work to date. “This is what I do, I am what I am.”