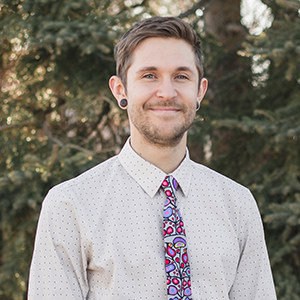 Marcus Agombar joined the Thunder Bay Museum as their Chief Operating Officer in April 2020 during the midst of the pandemic; which has made for a very eventful start to his career here.

Prior to working for the Museum, Marcus was the Director for Vox Popular Media Arts Festival (formerly Bay Street Film Festival). Relating to his film festival work, he worked as the Production Manager for Where The Poppies Grow: The Lakehead At War, a docudrama about the First World War, by Franco Finn Films.

In 2017 Marcus completed his Honours Bachelor of Commerce degree at Lakehead University majoring in Management Information Systems – which seems to have set him up as IT for the Museum.

Following his graduation Marcus began a non-profit service called BaySafe Harm Reduction with his wife, Ashley Brimmell. Through his work with BaySafe in 2017, Marcus was recognized by the Honourable Patty Hadju and presented with a Thunder Bay-Superior Northerner award. In the same year he also received the Mayor’s Community Safety Award for Outstanding Community Project from Mayor Keith Hobbs.

Outside of his professional life, Marcus is a father, owner of 2 dogs & cats, a plant lover, and electronic music DJ.