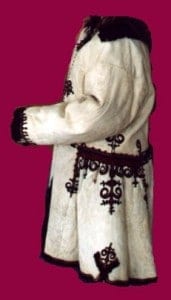 Immigrants to Canada could only bring with them their most treasured possessions. This sheepskin coat was one such treasure.

The garment is lined and edged with black wool, neatly embroidered in red and black with knotted hide buttons. It was clearly hand made at home in the Ukraine and brought to Thunder Bay just before 1914 by an immigrant woman seeking to rejoin her husband.

The most massive wave of immigration to Northwestern Ontario occurred in the years from 1900-1913 as people flocked to the region seeking economic prosperity and, in some case, religious and political freedom. The largely Canadian population of English, Scottish, Irish and French heritage was enriched by an influx of people from Finland, Italy, Scandinavia, the Ukraine and other parts of the old Austro-Hungarian Empire. By 1914, fully 40 percent of the city’s population had a mother tongue that was not English.

Key to the City