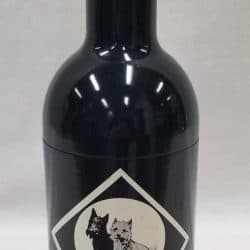 Black and White Scotch Whiskey Bottle, c 1970s.  Appears to be a Scotch bottle, but is it? It’s a cigarette holder and lighter, disguised as a harmless bottle of alcohol.  Smoking and drinking was very much the norm, especially in people’s recreation/rec rooms.