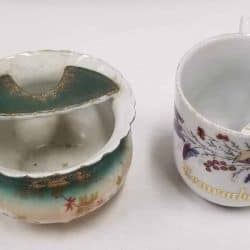 A drink cup with a half moon shape inside.  This ledge allowed the person to drink but also serve as a guard to keep the moustache nice and dry.  It was invented in the 1860s by a British potter named Harvey Adams.

From 1860 to 1916, the British military required its soldiers to have a moustache for the authority it gave off.  Often moustache wax was applied to keep it stiff.  When soldiers drank hot liquids, the steam from it would melt the wax, which would then drop into the shape moon shape inside the cup rather than in the drink.

Between 1920 and 1930, moustaches slowly began to go out of fashion and the production of the cup also died down.

Today these cups are highly collectible as is the increase of men’s facial hair!