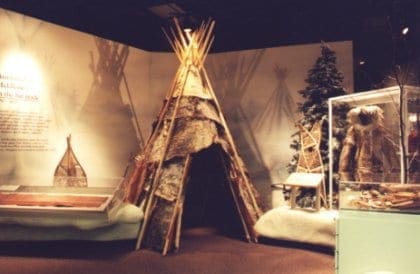 The Anishinabeg (Ojibway) of Northwestern Ontario

When they first moved into Northwestern Ontario, the Ojibway people numbered about 35,000. The early Ojibway lived a nomadic lifestyle, hunting and gathering what they needed in family groups each winter, and forming with other families into bands each spring. Birchbark wigwams, such as that seen here, were made in different styles.

One of the most unusual items in this exhibit is the Midewiwin Master Scroll (seen here on the left). The Mides, high ranking men and women of the Midewiwin Society, were responsible for preserving the health and traditional learning of the Ojibway people. Pictures inscribed on birchbark scrolls, such as this, helped the Mide remember the complicated rituals and numerous songs of the Society. These were used primarily as teaching tools.