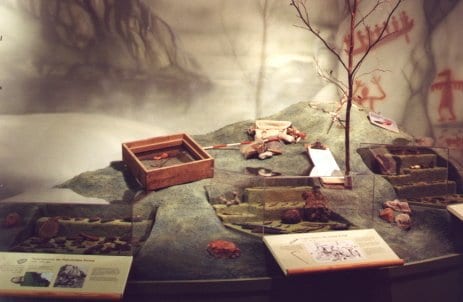 Thunder Bay’s prehistory began 9,500 years ago when the glaciers that had previously covered the entire district retreated allowing caribou and other large grazing animals to move into the area. The first people, known to us as Paeleo Indians, followed the herds.

We can divide our prehistory into three main periods, each defined by the tools commonly in use at the time. The cases in this exhibit illustrate archaeological digs for each period.

For more information about Northwestern Ontario’s archaeological record, see K.C.A. Dawson’s Prehistory of Northern Ontario and the opening chapter to Thunder Bay: From Rivalry to Unity both published by the Thunder Bay Historical Museum Society.