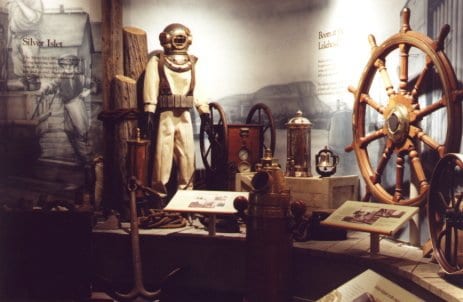 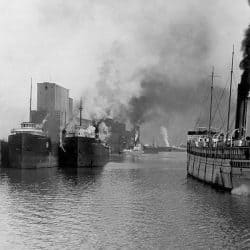 Thunder Bay’s harbour has long been the city’s economic life line. For many decades, Thunder Bay was the heart of Canada’s grain trade as most of the wheat produced on the prairies was sent by rail to the Lakehead where, from massive grain elevators, it was transferred to ship and on to markets overseas. Thunder Bay was, at one time, the world’s largest grain handling port. In addition to grain, the port shipped in coal destined for western markets and shipped out a wide variety of commodities, in particular lumber and iron ore.

This exhibit shows a deep sea divers suit, used during the construction of Thunder Bay’s breakwater, a whistle from the local tug Howard, a beautiful water cooler salvaged from the wreck of the SS Cambria, the ship’s bell from the tug Joe E. Smith, and the impressive wheel from the Minoco, the first oil tanker to sail the great lakes.

In recent decades, however, the harbour has fallen on harder times, particularly as most of Canada’s grain is now shipped to the west coast instead of through Thunder Bay. The days when the harbour was filled with ships of every size and description, such as in this view, are now gone. Nevertheless the harbour remains the site of four pulp and paper mills, numerous grain elevators, a ship yard, and a host of other industries.