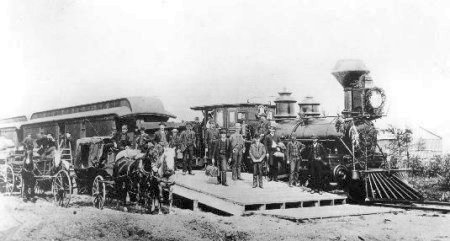 The Canadian Pacific Railway was a fragile band of steel designed to bind the far-flung territories of Canada into a nation. The historic first sod on the main line was turned four miles west of Fort William on June 1, 1875 in what is now part of the City of Thunder Bay. That simple ceremony signalled the start of a herculean task beset with monumental obstacles.

None was more challenging than the route through Northwestern Ontario. The C.P.R. threw its political and corporate might against miles of the hardest rock on earth and poured fortunes into bottomless pits of muskeg. In the summer, construction crews stirred up swarms of mosquitoes and black flies hungry enough to drive men mad. Over the winter the men languished in a bitter world of black and white.

Construction of the Thunder Bay section was scandalized by corrupt land deals and the unfair awarding of contracts, and by a legal dispute between the company and James Conmee that was to cost the C.P.R. an enormous sum of money.

A decade after the first sod was turned, Canada’s transcontinental railway became a reality when Donald Smith drove the last spike at Craigellachie, B.C.

At 4 p.m. on June 30, right on schedule, the “Pacific Express” rolled into the Lakehead. As this picture illustrates, a crowd led by Mayor G.H. McDonnell, met her at the Port Arthur station. She couldn’t linger, however, and the ceremony was short. She had a schedule to keep. On July 4, the “Pacific Express” completed her first transcontinental run at Port Moody, B.C.

This exhibit recreates part of a station and platform from the great era of rail travel.

For some records relating to the Canadian Pacific Railway in Thunder Bay see our archival collections for businesses.