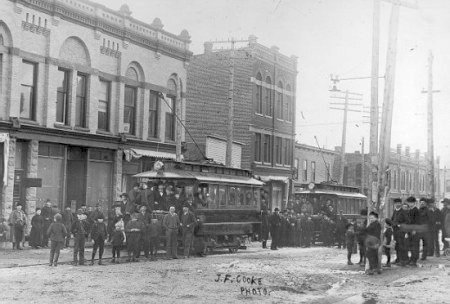 The Port Arthur Electric Street Railway was launched amidst controversy in 1892. It was one of the first municipally-owned railways on the continent. The controversy arose because it was, indeed, an inter-urban railway, running through both Port Arthur, which initiated and paid for the line, and neighbouring Fort William which wanted nothing to do with it.

The line grew out of depression. With the end of the silver boom of the 1880s, Port Arthur’s main economic raison d’etre was destroyed. Making matters worse, the Canadian Pacific Railway had decided to put its main elevators and rail yards in Fort William, six miles away, rather than in Port Arthur where local businessmen felt they naturally belonged. Seeing their business and population vanishing, the citizens of Port Arthur decided to build a streetcar line to link their business district to the C.P.R. yards in Fort William, this despite the vigorous objections of Fort William.

Compounding the problem were the numerous competing interests within Port Arthur itself over who should get to control the line. Eventually, municipal ownership won out, the line got built, Port Arthur survived (and later joined with Fort William to become the City of Thunder Bay), and Fort William, for a time, got nearly free streetcar service (paid for by Port Arthur).