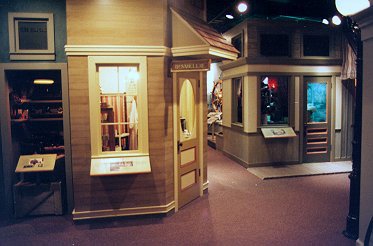 Move through time as you walk down our streetscape past Dr. Smellie’s surgery.

Dr. Smellie was another of Thunder Bay’s most prominent citizens. As early as the 1880s, he traveled the district by rail caring for patients in lumber and railway camps and mines. He also acted for years as Fort William’s Medical Officer of Health, roundly criticizing the local politicians for their inaction in cleaning up the streets and the water supply. He later entered politics and business, becoming the city’s Member of Provincial Parliament and the publisher of one of the major local newspapers, the Daily Times-Journal. This surgery contains most of what a well-equipped physician of the late 19th century would need.

The doctor was widely known in Northwestern Ontario for his heroism during the smallpox scare of 1892. An immigrant train, having arrived in Port Arthur from the east, was discovered to be infected with smallpox. Panic hit the townspeople who promptly sealed the car with the infected inside and shuttled it to neighbouring Fort William. When the people of Fort William attempted to return the car, they were met at the border between the two towns by armed citizens. The car was then pushed outside the limits of the town and abandoned in the sweltering heat. Armed guards kept watch over the car in case any of the unfortunate victims inside should escape and infect the town.

Dr. Smellie then intervened. He moved the car into the countryside where everyone onboard could move about freely outdoors, and then he treated the sick. He organized a major relief effort, by convincing the now ashamed townsfolk to pitch in and provide food, blankets and clothing.

In the end, only one young girl died, everyone else having recovered. Thanks to Dr. Smellie, a major catastrophe had been averted.