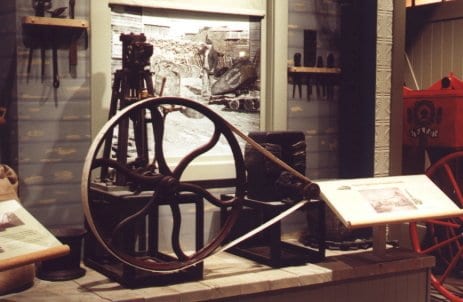 The Woodside Brothers Foundry, also known as the Port Arthur Iron Works, was established in 1883 and operated continuously for over 100 years.

The brothers had the distinction of generating the first electricity in Thunder Bay, in 1888. They were approached by Mr. George Dorman, an electrical engineer from England, who convinced them that, with only a few modifications, a steam engine Mr. Woodside had built for use on a power boat could be used to generate electricity. He was right and, before long, the brothers’ foundry was lit up at night and the talk of the town.

The local newspaper wrote of the marvellous device:

“At 750 revolutions to the minute a brilliant steady flame was maintained on a 20 c.p. 50 volt lamp, and though the sun was shining brightly the electric light cast shadows here and there across that part of the shop…The machine is the first of its kind manufactured and set up between Toronto and Winnipeg.”

So successful was the trial that soon Mr. Caleb Shera demanded that power be extended to his dry goods store. When they ran out of copper wire while drawing the line between the foundry and the store, clothesline wire was used instead. Shera’s business boomed making him the envy of all other merchants. Soon the whole town had to have electricity too.

The actual steam engine and generator used by the Woodsides in 1888 is the central feature of this exhibit. See our archival inventory for a collection of records relating to the Woodside Foundry.

The Fur Trade and Fort William