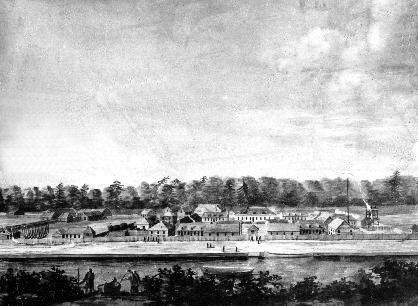 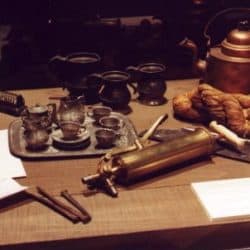 The Fur Trade and Fort William

The first fur trading post at Thunder Bay, Fort Caministigoyan, was established in 1683 by Daniel Greysolon, Sieur DuLhut, and another went up in 1717. This establishment, known as Fort Kaministiquia or “La Noues” fort, carried on a successful trade until it was abandoned in 1758 as a result of the war between the French and English. The large-scale trade in furs did not begin, however, until the North West Company (established in 1783 to compete with the Hudson’s Bay Company) moved its headquarters from Grand Portage to the Kaministiquia River near Thunder Bay in 1803. Originally called New Fort, the post was, in 1807, renamed Fort William.

Here each year at what was termed “The Great Rendevous” thousands of traders and trappers coming from the far flung regions of the company’s empire met to carry out the business of fur trading. For a dozen or so years, the company thrived at Fort William. Hard times and stiff competition, however, forced the North West Company to merge with its rival the Hudson’s Bay Company in 1821. Thereafter, Fort William grew less and less important to the new company and, eventually became just a minor post among many. The Fort had closed permanently by the 1880s, the land being sold to the Canadian Pacific Railway, and its last building was torn down in 1902 to make way for an expanding C.P.R. yard.

Today the fort is commemorated by Old Fort William Historic Park, a recreated site that captures the essence of the early fort in 1816. Interestingly, the site of the recreation is the same site as the fourth fort to be built at the Lakehead. In 1816, Lord Selkirk captured Fort William with the help of Swiss mercenaries of the De Meuron Regiment. Sending the North West Company partners to Montreal for trial, Selkirk kept his mercenaries busy by instructing them to build a new position of defence, ten miles up the river at a point of land that has ever since been known as Pointe De Meuron. It is here that the recreated fort is situated.

This exhibit shows items used, and often created, at the original fort.

For more information about the fur trade in Northwestern Ontario and Fort William in particular, see The North West Company in Rebellion, edited by Jean Morrison and published by the Thunder Bay Historical Museum Society.

See also the records of the North West Company and the Hudson’s Bay Company in the Thunder Bay Museum’s archives.